Morocco: the Center of the World 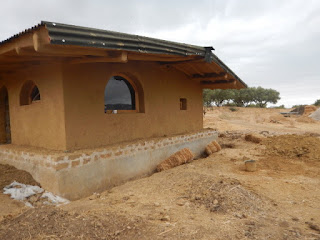 We have done international work before, but were still extremely excited to get our first invitation to North Africa.
(Technically, I think it's our first actual trip overseas - we've consulted on projects from Costa Rica to Mongolia, but many of them drew the line at paying our travel costs to come help them in person.)

Our hosts in rural Morocco did pay the plane fare, and put us up in some lovely, new, earth-walled buildings on their farm.  Which also has 100-year-old olive plantings.  They have been there 3 years so far, and hosted 15 different international experts in permaculture and sustainable technology to give courses, here on the farm, and in at least two different villages in the region.

The first step (aside from a crazy 3-taxi fiasco of a trip from the airport, and being served a bunch of good food) was to look at the local materials, and see what could be done with them.
The pink, hand-made, low-fired clay bricks that were the closest thing to split fire brick that our host was able to find locally were not high-temperature material. Nor were they square enough to stack on edge.

The villagers can make better brick than that by hand.  So we did.  We robbed a bit of nice local clay and finely-chopped straw from the plastering team, and mixed it with perlite to make an experimental "vernacular insulative ceramic," to be stacked raw and fired in place.  The first test fires were promising, with a solid "tink tink" terra-cotta fire on the inside, and fiber remaining intact (lending strength) on the outside.  So we used this improvised refractory insulation to build other heaters in both villages.  We are devoutly hoping that it holds up as well as we think it will.

Our expert translator had a schedule conflict, so we made do with my two years of high school French, the locals' 4 to 12 years of school French, and of course our hosts and some other European guests put us to shame with 4 or 5 languages apiece.  By the end of our two weeks there, we had a working pidgin of French, Darija (local Arabic), and Franglaise (English-with-a-French-accent) covering most of the essential building terms.
"Tobia" is a brick or block. (D)
"Traub" is earth. (D)
"Tain" is either clay, or clay-plaster. (D)
"Mizem" is measured - mizem l'ma, water level, mizem al height, plumb bob, "mizem?" "is it measured?" (D)
"Melange de perlite" was the word we coined for our insulating mixture (Ef)
Our host graciously informed me about halfway through the workshops that I was saying "noon" when I meant "half," but other than that, it went pretty well.

I was sometimes not sure how to act: we don't have the rich traditions of hospitality and courtesy to guests, and I'm also used to leading by example in mixed company.  The farm crew was accustomed to mutual respect between the sexes, unlike some later city encounters, but there was still some times when I was self-conscious about being the only woman in the room.  When I did go play with the women, as one morning helping make raiffe for breakfast, there was a huge language barrier and we had to get by with grins and shrugs and pantomime.  Once I started working with mud, and we could make jokes about my "cooking" things you can't eat, it seemed to go OK.  (There were women on the local plastering and gardening crews; one of them, a deaf-mute, was one of the easiest people to understand our whole first week there.)

I also enjoyed playing with the kids at one of the village project sites, Zacaria's mother's house.  After playing an extended game of "please sit down" in pantomime, Zacaria's little sister Miryam showed some interest in plastering, and once I got her started, he pulled out some classic big-brother teasing of the best kind (faster, faster!  More water!  Gotta get it done!")  He and another worker shoveled plaster in her direction, and showed her the ropes, and the bench accidentally got plastered a full day earlier than planned.


There was exotic scenery along the way.  Patient beasts of burden, plastered haystacks, traditional earthen-floored courtyards.  I noticed very few fences, certainly not the miles and miles of hog-wire that we have in the rural American West.  Instead, there were "drover's fences" of thorn-bush or cactus lining the main routes, with a few patches of wire, wood, or masonry fence here and there.

We also saw drover's bridges over the highways: long ramps where livestock could be led or herded over the pedestrian bridge, between fields and forests of cork-oak.  Donkeys or other beasts would commonly be hobbled or tethered, left to graze with their saddles nearby in "donkey parking" areas outside the farm or village.

The more impressive vegetable gardens would have rather stout thorn fences and a gate with a latch or rope tie; a lot of fruit trees grew "indoors," in the home courtyard (pomegranates, limes and other citrus, figs, some magnificent grapes). They would be economically watered with dish-water, or hand-washing and other light cleaning done with a jug of water directly over the planter bed.

There was plumbing to the kitchen, courtyard, and washroom in one village.  In the other, the well project had failed, and most water was carried by donkey or hand from a more distant well shared between two villages.  People were generally very conscientious about water for drinking and "impure water" for washing or irrigation, but I still had a little difficulty adapting.

A few hours away by elegantly-maintained taxi, our second destination was a village school overlooking a magnificent mountain valley.
It took a little longer there for the crew to gel, and to establish communication (since our working pidgin was, after all, almost entirely invented amongst ourselves in the first group).  But we gained the help of a masterful local builder with a good eye for equipment - he would raise an eyebrow and bring us his magnetic level, or a good steel tape measure, any time he saw us making do with an inferior tool.  I think his family had originally built the school, a generation or two ago, and he was taking a keen interest in the remodel and revival of it.  It didn't hurt his motivation when his grandkids dropped by to see what was going on, either.

All in all, our crew and students built 5 working heaters in just under 2 weeks, and each one fired up like a charm.  They sent us home exhausted and inspired.

The longest casual conversation I had was with my translation-buddy, Abdileh, whose home we stayed in during our time in the second village.  He has been to university, how much I don't know, and serves as the groundskeeper and permaculture educator at the village school.  As I understood his french, "the kids get tired of being inside with the lady teacher, and they come outside, and then I get to show them things."

That whole school is based on voluntary attendance: there is a public school in the village, but for kids who want an alternative, they can drop in and learn at this new school.  It reminded me of the kind of excellence I had to learn working for OMSI: in that case it was paying customers, and our exhibit design team told us we had 3 seconds to about 30 seconds to engage someone's attention before they would go elsewhere.  If your audience is not interested, they just walk out.  There is very little coerced attendence, aside from the occasional parental encouragement: there is no truancy officer, no principle's office to send unruly students.  The main hold the teacher has over the students is that natural authority that comes from continuously proving yourself worthy of your students' respect, time, and attention.  Those accustomed to enforced authority may find it surprising how much can be taught in this way, even topics considered too difficult or "boring" for regular school.

I got some perspective on Abdileh's life over lunch at Zacaria's house one day, during our third project.    During lunch I had tried to excuse my awkward learning phase in Moroccan-style table manners.  I bragged in broken French that I can "eat with sticks like the Chinese," trying to make the point that I know new things take practice, while gratefully declined their prompt offers of a separate plate and spoon.  (Shoukhram, saffiit.  Thank you, this is enough.)

Abdilah told me of some friends from university who studied Chinese - he went to that course for a few weeks, but his friends stayed for 3 years, and now they are in Peking - you know, the Capitol of China?

He was obviously proud of them, but made it clear that he is not jealous.  "I am content with my situation here - I learn a lot from these visitors, the work that goes on at the farm and the school is very interesting."

With a twinkle in his eye, he continued,
"Our cuisine is African, European, Arabic.  All the ancient empires were based in the Mediterranean - the Romans, the Ottomans, the French, even the British hold onto Gibralter.  And now that America is a big power, true, it's over there across the Atlantic, but where does send its ships when it goes after oil in the Middle East?  Right past our gates."

I couldn't argue with the history; not even the modern part (knowing Navy veterans whose "Mediterranean tour" included time in the Gulf wars).

So why should Abdileh not be content?
One day, he might consider travelling.
But for now, the world comes to him.

It is certainly humbling trying to teach anything, even a new thing, in a context where the collective memory may be comparing you to recollections of Rome.  On the way home, we passed briefly through Fez, home to the oldest university in the world.
Posted by Erica Wisner at 11:49 PM 1 comment: