Broke in my boots 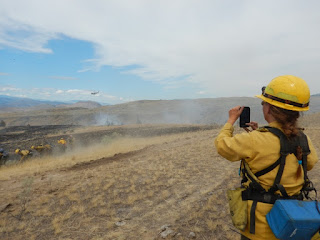 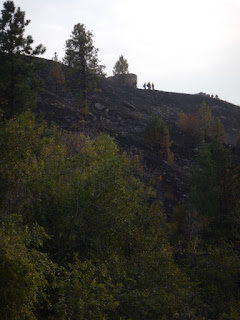 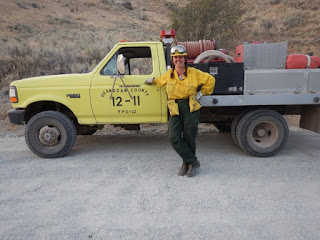 I've been out on a few fires in our district already, but this was the first "big one" - over 20 acres - and the first where we were standing by enough to take a few pictures. This was not in our district, but while doing resource work for a larger regional agency.

I don't know what caused this one.

Other fires I helped with this summer were caused by various thing: a lot of lightning strikes; some faulty equipment; some perfectly good-condition equipment being driven in hay fields in the wrong conditions (Level 3 industrial precautions - just having a hot engine out in the chaff can start a fire when it's this dry).
There was a lot of road-side stuff where it could be any number of proximate causes (engine backfire, chains dragging and throwing sparks, flicking butts, or even a glass bottle magnifying the sun light like a lense).  Turns out that just having those big open paths we call "roads," where people can drive fire-breathing engines at break-neck speeds, is a fire risk.

We did see some careless or illegal behavior like camp-fires built on top of an old stump, during a burn ban, and then not fully put out; and I heard rumors of arson but never heard one confirmed.

This fire was in some hay fields and some steeper terrain down by a creek and road.  They had air support put down some water and suppressant in the steep terrain.  Hand-crews and bulldozers lined the fire in the flat field country, got the whole thing lined after the air support knocked back the tricky spots, then mopped up the whole perimeter.

Our little strike team of brush engines mostly stood by with water to support the hand crews, which is when we took the picture of the air support.  Then I did get to spray down some hot charcoal and brushy stumps, once we were mopping up.

I climbed up that hillside a few times to help put out smoking spots on the edges, and skiied back down the bulldozer line in the moon-dust silt, but somehow I am still bright-yellow instead of grey with soot and dust.

Far more typical for those days on the strike team would be to rush out following a report of smoke, split up the trucks into 2 or 3 roads to try to pinpoint the source, and then hear over the radio that someone had been asked to shut down their barbecue and not use wood-fired grills during the burn ban.

For our local fires, as a new fire fighter I'm mostly told to go patrol for spot fires.  Found a few on some jobs, and once got to break open a stump with my shovel for the other guy to hose it down better, but mostly get some nice walks in the woods with other folks in fashionable yellow and green outfits.

No, honest, Mom, it's very safe and healthy for me to be doing this.

I get to meet great people, and work under experienced and conscientious local leadership, highly trained and aware of the lives in their care.
Posted by Erica Wisner at 2:04 AM No comments: