The badges came.  These are the same graphic as we used for the truck decals, now in a nifty 2" woven/embroidered format. 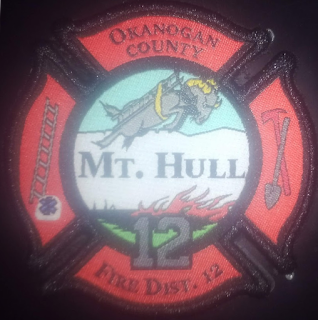 The snow is going.  Here are a few more of the pictures from last week's marvelously misty weather. 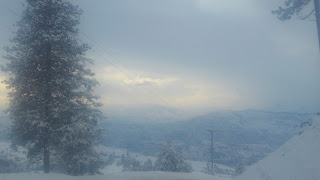 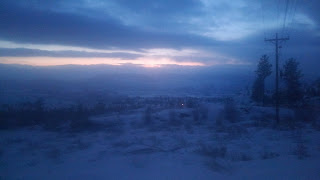 Now the snow is receding - all the south slopes are tawny bare again, with tiny green fuzz starting to show.

Academy continues to go well.  All 16 of our classmates passed their practical exams Sunday, for the basic fire fighter skills.  We won't know for sure on the written exams until they process the Scantrons in a week or two, but it's looking like Mt. Hull has 3 new structure-qualified fire fighters.  We have 4 more weeks to complete the HazMat Awareness and HazMat Operations parts of the course, then graduation is scheduled for the evening of April 14.

The snow remains on some of the north slopes and shaded creek beds, but also on some of the tops of the slopes - an interesting "snow cap" that outlines the whole shape of each hill along the Columbia/Okanogan confluence.

Not sure what allows this snowcap to remain on the top of the south-facing slopes - air currents? radiant frost? just the slight change in angle that means the flattish ridgetops are not facing the sun as directly as the steep slopes?  As you can see, the snow comes down along the ridgetop well below the elevation of bare slopes above, so it's not just an elevation/snow-line thing. 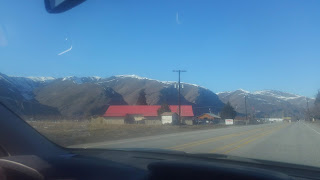 We still have plenty of slush and snow on the roads up here above 3000 feet, but it's starting to melt and drain during warm days.