So for this year's Rocket Mass Heaters workshop in Montana, our friend Paul is launching the Innovators' Gathering.

He asked us to nominate 4 remarkable innovators who've done neat things with rocket mass heaters.  These 4 people will be invited to attend the entire event as guests.

Things start with our tried-and-true, cob-style rocket mass heater workshop Sept. 19-21.   Then from the 22nd through 26th, we have a "Pyronaut's Laboratory" where all 4 (or 6, or 7, depending how you count us) get to play and innovate. Paul's providing workshop space, materials, and inviting his crew and other interested folks to serve as "minions." We anticipate the challenge and inspiration of working alongside other innovators may lead us in some unexpected new directions.

If this sounds like a wonderful time to you, well, come!  Tickets are still available to be a student for the weekend workshop, or if you have prior rocket experience you might just want to sign on as a "minion" during the week-long Pyronautics Laboratory session.  There's a combined rate to be there for the whole thing.  http://richsoil.com/rmh-workshop.html

We had a hard time narrowing the field down.  There are at least a dozen people we know doing good work in this space, and that's not counting the ones we don't know about.

We thought about who we'd like to meet.  Who has done something uniquely interesting - or fulfilled a frequent request in a particularly robust way.  When people ask us for something we haven't done yet, who do we send them to?

We tried to balance different talents and personalities for creative ferment.  The "who we'd like to meet" category tended to favor people from further away; those who might not consider attending if they had to cover both travel and ticket costs.

And of course, those who publish their results on YouTube, or spend time on the Permies.com (or ProBoards) forums, are most likely to catch our attention in the first place.  We also paid attention to the suggestions people made from our mailing list.

We are extremely excited that most of A-list said "yes," they plan to attend.  Here, in alpha order, are the 4 confirmed guests: A long-time permie from Australia and New Zealand, Tim built the most robust rocket water-heater that we've seen.  The design uses minimal parts, no electronics, yet safely controls water temperature and vents off steam pressure, and allows students and interns to produce their own hot water for showers with minimal instruction or experience. You can see Geoff Lawton explain the water-heater setup here on YouTube; Tim has also written up the project, and answers questions, in.
this article at permaculturenews.org.
It's not his first rocket rodeo, neither. Tim's work seems like interesting hybrids of rocket mass heater (J-style) firebox, but with a flexibility more customary with rocket cookstove fans.  Here's a rocket-powered oven:
http://permaculturenews.org/2012/11/08/rocket-oven-nitty-gritty/ 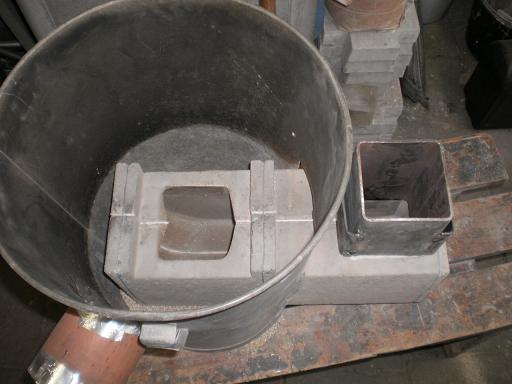 A masonry heater scientist, Peter has been testing subtle refinements to the rocket mass heaters' firebox, getting the performance and emissions tuned-in to run from start to finish without a puff of smoke.  He also designed a cast-refractory firebox using these improvements for the DragonHeater folks.  Peter is a regular contributor on both the ProBoards and Permies.com forums.  We hope he will be able to bring his Test-O Meter and other toys.
A sample PeterBerg post from Proboards - http://donkey32.proboards.com/thread/472?page=2
- http://donkey32.proboards.com/thread/355/small-scale-development

A bit of a dark horse from Ohio, we got to meet Chris in 2012 and have heard updates from mutual friends at the Strawbale Studio and privately.  Chris has been playing with small-scale heater hybrids like his woodstove-mass-heaters for smaller spaces and portable locations (like a school bus).  Chris is also very active with Mother Earth News, and print-on-demand resources for natural building; he has a depth of knowledge about who's doing what in the natural building world that leads to very interesting hybrid projects using reclaimed or conventional materials alongside robust natural building methods.
Facebook:
Woodstove mass heater ("It works ... sort of.")
8" rocket mass heater  (with reclaimed cast-refractory components, below)
Bus stove with bum warmer

One of the relative locals, Matt was the first person to publicly solve the flame-viewing window ... and the second as well, with two different heaters using different materials, and featuring a mini-oven and a modified cooktop vent.  He's also submitted a variation called "Walker stoves" to efficient wood-heating competition, and posted about other experiments on YouTube and the Permies.com forums.
https://www.youtube.com/watch?v=A4NoC0U8geMhttp://www.permies.com/t/28331/rocket-stoves/Walker-Stoves ,
http://walkerstoves.com/

This get-together is going to be a memorable lot of fun.


In other news:
- Ernie will be going to San Antonio shortly to be fitted for a new, dynamic leg brace that might put him literally back in the running this fall.  We are trying not to get our hopes up too much, as there will still be pain and circulation issues to manage, but we hope that the brace will be in good working order by September and allow Ernie more hours on his feet.

- The Carleton Complex (wildland fire) is burning along Hwy 97 about an hour south of us, yet so far westerly winds are keeping our days almost smoke-free.  We are checking the InciWeb periodically for updates: http://inciweb.nwcg.gov/incident/3967/
I'm not yet fully trained as a firefighter for our local volunteer fire department, so we're just trying to stay informed, and replace worry with action whenever we think of something useful to do: weed-whacking, tidy up the clutter around the house, etc.  Right now the local weather remains clear, breezy, with only a hint of smoke to the south south-west (spectacular sunsets and moon-rises).  The biggest impact on a daily level is that I'm milking goats for a neighbor who has been deployed "on resource" with one of our local water-tender trucks.

- The irrigation well is back on line (last winter's hard freeze damaged the well itself, but the repairs didn't take long once we got the right folks on the job).  Running water, hot showers, and plenty of water for the garden.

- Strawberries, cherries, and peas are in season up here, and tomatoes, cucumbers, summer squash, and various berries down in the valley.  I got to play "substitute farmer" last week, trying to keep up with Leaping Sheep's abundant production for almost a week while the owners took a family trip.  This week I've been milking goats and braiding garlic.  Very country!
Posted by Erica Wisner at 11:14 PM No comments:

the smoke ascending, it seem to reach the sky

The clouds of smoke over the wildfires to the south of us are making their own weather.  Heat from the fire drives convection currents upwards, making the classic "caulflower" shapes in the smoke (same as cumulous clouds, except dirtier).

("I saw the smoke ascending, it seemed to reach the sky/
.. till all my strength had left me, and all my courage too" are lines from Texas Rangers, performed by Tex Ritter among others, lyrics have been attributed to Richard Shindell or .  Though in the case of wild fires, the conclusion "you'd better stay at home" will only help if your home is someplace green and humid, far away.  Wild fires and the extreme weather that's increased their ferocity in recent years are far more implacable than the fiercest warrior; wars are avoidable, but even if we gave up all our combustion-driven toys and spark-producing tools, we'd still be facing lightning-lit fires across these Western landscapes in dry summer weather.)

In this image you can see a "lenticular cloud," sometimes called a mountain cloud or lens cloud, the little bent wisp above the main cloud.  This type of cloud is formed when air is forced upward (usually as it passes over a mountain rainge), causing little droplets of water or crystals of ice to form in the bands of air.  I believe it's because the air gets chilled, and the pressure drops, as it's forced upward - if there was almost enough moisture to make a cloud, and you change the conditions to make it a little easier to form a cloud, then you get a little cloud where those conditions are different.  You will often see similar lens-clouds hovering over mountains like UFOs.
This is looking south from the parking lot at the grocery store.  I ran into our current fire chief, and he said he thought those kinds of clouds only formed way high up in the atmosphere - meaning this smoke column is getting really tall.

Still seeing the smoke column growing this evening, over larger hills, on my way home.  There are also bands of 'drift smoke,' which has cooled enough to sink but is not ready to fall out of the sky yet, lower down.  Drifting smoke can stay in the air for days or weeks, making it hard to see what's going on with the fire (or anything else), and making a lot of people nervous so the fire department gets more false alerts.

(Of course, fire fighters would much rather get a false alert than sit on our hands while you wait for the fire to get big enough to be sure.... but it would be even better for everyone if we had some nice, gentle rain to wash the smoke out of the sky, leaving us a clear field of view and better chances of controlling any remaining fires.) 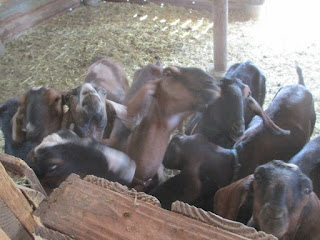 While all this is going on, our little rural fire department is sending a truck or two to help with the efforts on the big fires.  I'm babysitting Karen's goats, while she's off running with the fire crews.  Lots of goat milk!  Lots of curious noses!
Posted by Erica Wisner at 6:35 PM No comments: