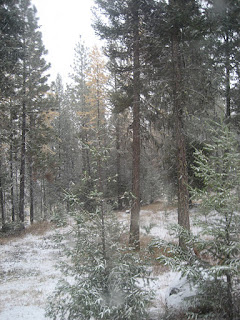 For the last five months, we have been insulating, burying water lines, sealing windows, building a masonry heater, chopping firewood, clearing the driveway of obstacles, and sorting our storage into 'do not freeze' and 'who cares'.

Now that the snow is here, and we are snug inside, it's time for other things.

Today I've been working on sewing, gift-type items mostly. Yesterday I made an egg basket.

Our chickens have, contrary to the usual practice of chickens, increased the eggs they are laying now that it is cold. (Well, really my in-laws' chickens, but I feed them often enough that they recognize me as part of the Hive Mom.) I think it's mostly the fact that the spring chickens have finally matured enough to start laying. It doesn't hurt that we feed them the fatty scraps from our winter-weight diet of bacon, pot roast, or cheesy pasta. I took them some leftover bird-suet, too. Ron tells me that their feathers are mostly protein, so if they don't get enough meat (bugs being scarce under snow) they stop laying in winter. Vegetarian chickens are rarely the happiest or healthiest chickens; Ron and Janine even gave them the turkey carcass after Thanksgiving (though we do make a point not to feed them their own eggs). If you doubt, check out the Youtube video of 'a hen and her mouse'. 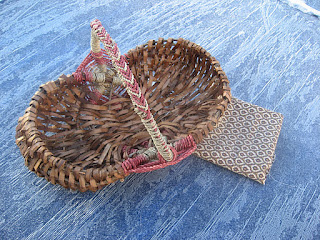 The basket is sized to hold an egg carton (I used a dozen-egg carton to measure it, but it should hold two of these, or the 18-egg carton, pretty easily). It also has flattened bulges in the bottom, to keep the eggs apart in case you don't bring the carton out with you. I'm thinking it needs some more detail, maybe a cloth liner, or some cording along the rim, to coordinate with the detail on the handle.

Tonight, I think I'll do a little more of the sewing, then make a smaller sewing work-basket for my current projects.

It's very satisfying having this much 'free' time. I try to keep the creative projects to the evenings, and save the business day for keeping up with email, finances, and the ongoing logistics of setting up workshops and teaching classes. I'll be in Portland working with Trackers for winter break, for example, and if I don't want to drive a Geo Metro through ten-plus hours of snow, I'd better get some train tickets tomorrow.

Ernie has been doing his version of 'sedentary puttering,' which includes setting up his dad's computer to run boat-design software, and keeping in touch with the Internet providers after a mix-up with our service. We went down to the elder Wisners' house yesterday for a couple of games of cards, contract Rummy, which has many more rules than anyone could remember until I broke them one by one. And there are plots and plans afoot for Christmas gifts. Apple butter, peach preserves, and Ron is stocking his pantry for a winter storm of fresh-baked bread and other treats...

Hope the longer nights are affording you a similar abundance of time for peaceful productivity,
yours,
Ernie and Erica
Posted by Erica Wisner at 9:11 PM 1 comment: