All the Pretty, Amazing Mothers (part 4 of 4)

Among my earliest memories is a beloved and familiar voice singing a lullaby in my childhood bedroom.  The warm coverlet with its broad plaid stripes in shades of brown, orange, gold, and green.  Darkness obscuring the shapes in the wallpaper.  And the mellow, sweet voice, familiar and unforgettable:

I'm sure there was a "go to sleep" in there somewhere, but it was lost among all the pretty horses.

With a godmother like Mary Ann, it would have been difficult to avoid going horse crazy.  She was in her teens when I was born, and I remember a later visit to Portland where she carefully offered me a selection of her almost-best model horses.  I probably still have the grey appaloosa, with the same broken foot that it had when she gave it to me, and its beautifully detailed conformation. Appaloosas were always her favorite.  I preferred bays as a child (to the point where my parents got me a Lone Ranger Silver horse toy with articulated legs, but repainted it brown with a black mane and tail for me).  I had a Grizzly Adams donkey whose muzzle I shaved after it became apparent to me that real horse-kind had velvety muzzles, not fuzzy hairy ones.

When I was about 10, Mary Ann was instrumental in setting me up with a skilled, pragmatic, and foxy riding trainer called Christina Traunweiser.  Some years my parents would pay for lessons, some years I would work for them.  The process of mucking out stalls every weekend in my formative years means a shovel is still the tool I know best (aside from paper and pencil).

Unlike Mary Anne, I eventually got over the "I want a pony" feeling.  I know exactly how much work a horse is, and unless I achieve a rare state of rural life and surplus income (or have work suitable for a horse or mule to earn its keep), I am more than content to share the pleasures of other people's horses.

Mary Ann finally got her ponies when she married Craig Stevens, and now teaches classical equitation in Snohomish, WA.  (I delight in hearing stories of my nieces, and my mother, getting a riding lesson from Mary Ann on their visits.)

The music continued too. I loved singing together at family gatherings, and Mary Ann and my dad were definitely ringleaders in that regard.

And although glittery pink ballgowns were not really her style, she did play "dress you up for the ball" one school-shopping trip when we blew our budget on a formal dress jacket instead of the expected jeans.  I wore it to a variety of dances and formal occasions for years.

Kacy claims to be our W.E.S., but she is not very good at it. She married my father at a time when all of us kids were lining up to get married, and just so happened to have ten years as a professional wedding planner under her belt.  And she's a highly skilled photographer.

(Since she doesn't love being in front of the camera very much, I was just going to represent her with a casual selection of her work.  But someone caught her on her way to ride bikes with my Dad for his birthday last month - something he used to do daily, but she hasn't done since getting hit by a car at age 13... a pretty special birthday treat for him.  I'll let Facebook decide how long it's available to show here.)

For our brief attempt at being commercial chocolateurs, she took sumptuous process shots, jazzed up our table with bronze chiffon and sparkle lights, and then presented us with matching chocolate-themed aprons to wear at the event. 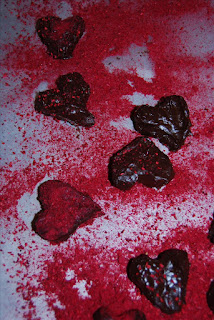 But my most wicked-favorite thing about Kacy (besides how much she and my dad care for each other), is her sense of humor.

She and Ernie are closer in age than either is to their spouse, and they can make each other laugh like few people I know.  As a result, Kacy has gotten some truly charming photos of Ernie. Most other photographers capture dramatic tension, rugged intensity, self-criticism, or just a stern thousand-yard stare.  But with Kacy around, you get to see in pictures some of the genuine fondness and delight he usually reserves for trusted family.

All in all, catastrophically mis-cast in the "wicked evil stepmother" role.

My mother-in-law and mother-out-law (not sure which is which) are very different from each other, but both are fun to be with.

Peggy Myers is spunky, full of curiosity and enthusiasm, a stalwart Believer (though the church may vary, the faith remains strong).  I love hearing her pronounce her delight in a new discovery, a charming shop, or a clever gardening trick: "I just think that's neat!"  Peggy loves trying new restaurants, finding a tea shop we can share, learning more about local businesses, getting involved with neighbors, and introducing friends to each other. She has remained close friends with neighbors from our former shared address in Portland, and is probably the single most reliable person to give us a call and say "How was your day?"


Jeanine Wisner is enjoying retirement on her one-horse ranch, after a career as a small-business accountant, commercial fishing, and a memorable sojourn in Japan.

We definitely took advantage of her accounting advice early in the business setup.

It's nice to have someone right within walking distance for the occasional "girl chat." Sometimes with cream puffs, white wine, or a hot cup of tea. Sometimes with deep forays into social mores, politics, or the right relationship between humans and the rest of life on Earth.

When we're not being profound, we like cooking treats for each other (she makes wicked fried chicken; Ernie has perfected a honey-shrimp recipe that was one of her favorites at a Chinese restaurant; and I seem to be most popular lately for those cream puffs.) And swapping fiction novels for some mental R&R.
...


My sisters and sister-in-law are amazing mothers, too.  As are many of our cousins and friends.

I continue to admire every gal who manages to wear the "mother" hat and be herself at the same time.  It's not easy to be the focus of someone's fantasies, physical needs, and developing personality 24/7.  Raising children is a collaborative art, with the parents, the child, extended family, and the larger society all playing a role.


Some writers have started wishing "happy mother's day" to men, especially those with the courage and stamina to take on the critically important, early-childhood parenting that remains a bastion of feminine influences and expectations.  Most mothers do not have the police called on them when they sit on a park bench supervising their child's play, for example.  Fathers, uncles, aunts, in-laws, grandparents, and friendly neighbors who participate in raising healthy children, alongside those iconic mothers young and old, create a richer life for the family and our future.